This Product has been viewed 2085 times. 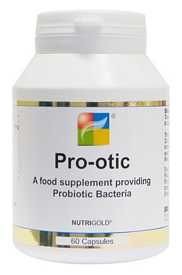 Support your digestion with this high potency probiotic A real first for probiotic supplementation!
As far as we are aware Nutrigold Pro-otic® is the first full spectrum probiotic to set a new industry standard by delivering a proven potency at the time of consumption, while having the convenience of being able to be stored at normal room temperature.
Probiotics
For many years leading naturopaths have recommended the use of foods that supply a good level of positive digestive bacteria. In more recent years many more people have become aware of these benefits through high-level media adverts that promote the health benefits of eating biologically active yoghurt on a daily basis. It has long been established that a good level of slightly acid forming bacteria can help support a healthy digestive and immune system.
Support a healthy digestive system with Nutrigold Pro-otic
The key roles of probiotic bacteria are to produce lactic acid, thereby keeping the conditions in the lumen of the bowel weakly acidic. In the large bowel or colon these positive bacteria ensure that undesirable organisms that promote a more alkaline environment and have a mainly putrefactive action are inhibited. Long-term naturopathic wisdom therefore advocates, as a guideline for good digestive health, maximising the acid producers and minimising the alkali producers in the intestine. This is done through using a carefully considered balance of viable probiotic bacteria in a supplement form, which are probably best supported by a diet low in animal produce. Nutrigold Pro-otic® – delivering the goods
Nutrigold Pro-otic® has set a new industry standard by delivering to its consumers a full spectrum probiotic that's proven to deliver it’s all important bacteria at the time you take them, not just at the time of formulation! This is a real breakthrough as most probiotic products on the market are unable to promise.

Why is a proven potency so important?

A major consumer magazine carried out a test on many of the popular probiotic brands on the market. This showed that most brands failed to deliver their declared label claim, so now many suppliers cover themselves against this issue by using the term “at the time of formulation” i.e. not at the time you take the supplement! This means there is no way to know what you are getting when you take such a product. Nutrigold Pro-otic® takes the guess work out of probiotic supplementation by delivering these important bacteria, which are stable at normal room temperature (4ºc - 22ºc), for fifteen months from its date of manufacture. So unless you are going to expose them to extreme climates, there is no need for inconvenient refrigeration. These bacteria have also been noted to be particularly good at adhering to the stomach lining, so there is no need to add controversial ingredients like fructooligosaccharides.

Each capsule of Nutrigold Pro-otic® delivers:

A carefully blended range of multiple bacteria, delivering 3.5 billion viable organisms per capsule, for fifteen months from its date of manufacture. This product can also be stored at normal room temperature so there is no need for inconvenient refrigeration (room temperature is defined as 4°c - 22°c).

Directions for use for Nutrigold Pro-otic
Take 1 - 2 capsules daily with food, or as directed by a practitioner.