This Product has been viewed 1404 times. 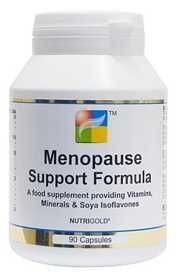 What do the professionals think about the menopause?
As we are more than aware this is a natural time of life, which brings with it so many new and interesting challenges for women’s bodies as well as the mental effects it may have upon them. These days the media is constantly reminding us of the concerns that surround the conventional approaches to supporting these changes, and although we do not suggest that nutrition is a direct alternative to these approaches, this is an opportunity to see natural nutrients working at their very best. The menopause process tends to take place in women between the ages of forty five – fifty five, however, everyone one has heard of cases where this process happens in much younger women. Some of the leading complementary health practitioners feel that this may be influenced, in part, by the diet. However, orthodox views would tend to disagree with this idea.
Why is the menopause seen as such a landmark?
It is unfortunate that in our western societies the onset of the menopause is often viewed as an undesirable period of ones life. We feel that these views and in many cases the jokes that are made about this process often add to the concerns a women has, not only about the changes that are happening to her body, but also how this process is seen by her partner, family and friends.
The results of our research
Nutrigold have researched this area in great depth and based on our findings have put together a carefully considered blend of natural nutrients that we feel are important to support these processes. One of the key areas people always associate with this time of life is the need to maintain strong bones. Many products that claim to support the menopause or bone strength focus nearly all of their attention on supplying high levels of calcium, often delivering this calcium as an inorganic mineral which are known to be poorly absorbed, like calcium carbonate (chalk) or calcium oxide. ot the case with Nutrigold Menopause Support Formula
We feel the reason calcium is included in nearly every nutritional formula which claims to support this time of life is because calcium has a very high profile in the media and so the consumer has become convinced that any formula which can help them during this period should contain high levels of calcium. Although we totally agree that calcium is very important to bone strength, we strongly disagree that there is a real need to supplement this nutrient unless one has a diet that is very low in greens.

The logic behind Nutrigold Menopause Support Formula
The Menopause Support Formula is one of the only formulae on the market that breaks with the tradition of focusing on the supply of calcium. We have done this because our research clearly indicates that the average British diet delivers an abundance of calcium. In our view we can clearly see the need to supply, in amounts that we consider to be more optimal levels, other important nutrients and their co-factors which are known to support this time of life and bone density. One of the key nutrients we feel is in particular need of supplementing is magnesium, which we have put into this formula as a well absorbed organic Citrizorb® mineral, so as to ensure its maximum uptake.
Another such nutrient we feel to be important to support bone density is the often-forgotten trace mineral boron. Both of these important nutrients are delivered with a carefully considered blend of ingredients known to encourage the deposition of bone and hence the more efficient use of our dietary calcium. Nutrigold Menopause Support Formula delivers a biologically active form of the important soya isoflavones which are noted to help support phytoestrogen activity.
What foods can help support this time of life?

In the past women would have had a diet that contained a great deal less highly processed food. This would have normally contained far higher levels of foods which we feel offer important nutrients with estrogenic properties. In particular these are; fruits (apples, cherries, olives, plums, coconuts), legumes (soya beans, peanuts), tubers (carrots, yams), members of the night family (eggplant, tomatoes, potatoes, peppers) grains (cereal grains, especially wheat germ, but not rye, buckwheat or white rice). Similar components are found in yeast, fennel, anise and liquorice. All of these foods contain compounds with estrogenic properties. However, the concentration of these foods differ greatly and none of these foods deliver a comparable level in the concentration found in the soya isoflavones, which are included in the Nutrigold Menopause Support Formula.
Other products that support the actions of this formula
To offer the body what we would consider to be the optimum nutritional support we would recommend you take along side this formula some form of essential fatty acid product, normally our EPA Marine Fish Oil, Golden Flaxseed Oil or our allpurpose, essential fatty acid and antioxidant formula Red Alert. In the early part of the menopause we recommend the introduction of one - two capsules of our Dong Quai.

Directions for use for Nutrigold Menopause Support Formula

Take 1 – 3 capsules daily after food, or as directed by a practitioner.